If you are planning on visiting us, you should take into account the following aspects:

Students from non-EU countries
Students from outside the EU might have to apply for a "Student visa". Contact the Consulate or Embassy of Spain in your country to find out about the procedure.

Santiago features a humid oceanic climate. Given its proximity to the coast, winters are warm, with average temperatures of 8 °C to 13 °C, and summers are not too hot, with temperatures ranging from 20 °C to 27 °C.

As the weather in Galicia is rather unstable, you should pack some warm clothes, warm shoes and an umbrella, regardless of the season. In the summertime, bring your swimsuit too: Santiago is very close to the coast and Galicia offers numerous beaches to enjoy a refreshing bath.

Santiago has an international airport (SCQ) with direct low cost flights to and from many cities. The airport is a few kilometres away from the city. Once you arrive at the airport, you may take a taxi to the city centre - you will be there in 20 minutes and it will cost approximately 22 Euros -; but you may also take the bus, which departs from the airport every half hour.

If you need to book an international flight, you might find it useful to check the connections with other nearby airports, such as Vigo (VGO), Corunna (LCG) or the international airport of Porto (OPO), in Portugal.

You may also arrive in Santiago by train (RENFE) or bus, as there are multiple connections with other cities in Spain and other countries.

Santiago is a welcoming city and it offers a broad range of services. The cost of living is highly affordable and it is a safe place, with a very low crime rate.

It is the capital city of Galicia, a bilingual, age-old region where Spanish and Galician coexist as co-official languages.  Galicia is a crossroads between the Spanish-speaking and the Portuguese-speaking worlds, and it is a wonderful example of cultural diversity.

Moving around in Santiago is easy and trouble-free. This is a small city and you can walk almost anywhere. And there are a few very convenient bus lines too.

Cursos Internacionales is in the southern campus - also known as Campus Vida-, in Avenida das Ciencias, s/n, chalet 2. This campus is part of the city, and it is just a 5-minute walk away from the old town.

Our classes are taught in different nearby faculties. The first day is devoted to the placement tests, both written and oral, which let us gather information about each student’s previous knowledge of Spanish. Then, we take students for a walk around the campus so that they may get familiar with the main buildings, facilities and services offered.

We have agreements with different foreign universities, so you may have the chance to get credits for the courses you take with us.

If you wish to extend the course period and stay longer, just let us know.  We will inform you and help you with all the paperwork at our office.

This festivity occurs on variable dates between the end of February and the beginning of March. In Santiago, the passion for masks, make-up and costumes culminates with the Fat Tuesday parade, with carriages and bands whose members are neighbours and friends. This celebration is characterised by a series of typical dishes ranging from Galician broth or Lacón con grelos (boiled ham with vegetables) to desserts such as Filloas (crepes), or Orejas and Flores (two types of fried pastry).

Easter in Santiago comprises a series of essentially religious events including processions, liturgical activities and concerts of religious and ancient music.

Ferrol and Viveiro, two nearby cities, boast the most traditional and famous processions in Galicia.

This festivity was instituted in 1963 by the Real Academia Gallega. This day is a public holiday in Galicia. It is devoted to a different outstanding person every year in the areas of Galician language and literature.

This is one of the most popular festivities in Santiago. It takes place between May and June and offers a series of live performances and concerts, as well as a variety of leisure options. Come and dance at one of the open-air dances in the Alameda park!

On the 23rd of June, Galicia celebrates the magic of Saint John’s Eve. The city lights up with cacharelas (bonfires), and people jump over the fire to drive meigas (witches) and their spells away, while the traditional sardines are grilled on the ashes. Saint John's Eve is teeming with rites, such as, for instance, soaking certain magic plants in water overnight and washing with that water the next day to purify oneself.

It takes place on the second half of July. In this Celebration of International Tourist Interest, the solemnity of religious, official rites combine with a folk twist and a vibrant spirit, turning the city into a huge festival.

On the night of the 24th of July, the Obradoiro Square hosts a magnificent show of fireworks, light, colour and sound. The next day another celebration is held: the Día de Galicia; with different events attended by thousands.

It is also on this day that the Ofrenda al Apóstol takes place. This is a formal ceremony involving local and national authorities. A mass is held and the botafumeiro - a huge incense burner - swings across the cathedral, shrouding it in a mystic halo. 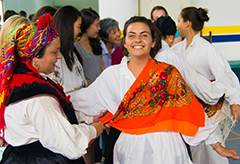 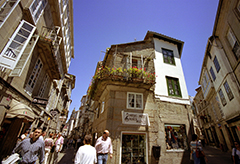 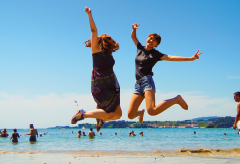 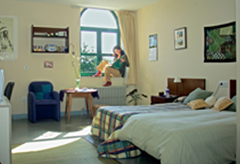